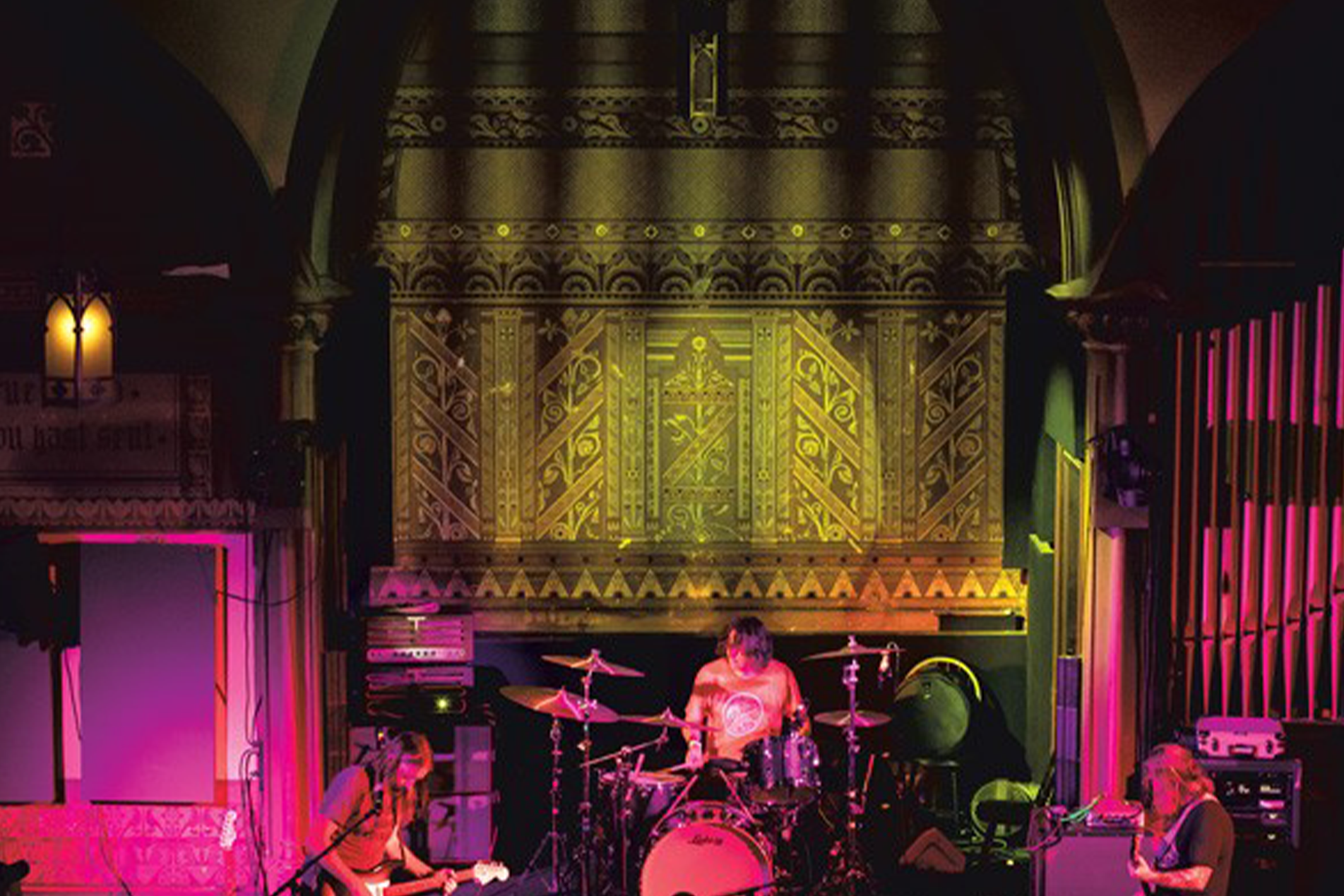 In Brattleboro a Church is an Atmospheric Music Venue

In recent years, Brattleboro has launched some of the Green Mountain State's best musical acts — metal band Barishi, stoner rockers Witch and post-punk trio Thus Love, among others. But many Vermonters have been missing out on the burgeoning scene in the southeast corner of the state.

"It does feel sometimes like we're only kind of connected to the rest of the Vermont arts and music scene," Brattleboro resident Erin Scaggs observed. "We're almost more a part of Massachusetts or New Hampshire in some ways. But we want to change that and be this place that people want to go to, where you can't miss a show."

Enter the Stone Church. Sitting peacefully atop a plot of grass at 210 Main Street in downtown Brattleboro, the venue offers an unforgettable atmosphere, whether it's a rambunctious metal show or an intimate folk concert.

The 147-year-old building existed well into the 1960s as the All Souls Unitarian Church before closing its doors. Since being repurposed as a venue and reopening in 2016, the Stone Church has become a central piece in the southern Vermont arts community. The club brings in internationally touring acts such as English singer-songwriter Robyn Hitchcock and Portland, Ore.-based indie pop superstar M. Ward, as well as supporting musicians including the town's own synth rockers Dutch Experts and expat singer-songwriter Sam Amidon.

"My father bought the church in the '70s," owner Robin Johnson said, standing beside the bar he installed to the left of the stage. For many years after his family acquired the building, it served as a combination of offices and manufacturing space. As a member of the Brattleboro music scene for years, though, Johnson harbored loftier designs for the old church.

"It was really clear that the community needed a place like this, where we could see these types of acts," he said. "It's not the easiest thing to book acts in Brattleboro!"

Nestled into a corner of the state near the Massachusetts and New Hampshire borders, Brattleboro isn't a logical pit stop for touring acts. While Burlington venues can catch bands between their New York and Montréal shows, it takes a little more elbow grease to get tour buses to detour to southern Vermont.

Assistant manager Scaggs helps bring talent to the Stone Church. She has a prodigious appetite for live music and the savvy to leverage community connections: She also serves as the creative director for the Downtown Brattleboro Alliance, a nonprofit that works to support growth through art, recreation and commerce, and is the founding director of Gallery Walk, a summer series promoting art in the city.

Those initiatives and other local efforts — such as Epsilon Spires just down the street, another church converted into a beautiful space for art, film, music and more — are all part of a concerted push to raise Brattleboro's artistic profile.

"There is definitely a buzz about Brattleboro's music scene right now," Scaggs said while watching San Diego psych-rockers Earthless load their gear into the venue for a show later that night. As Boston-based opening act Ghosts of Jupiter began sound check, the drummer pounded the bass drum. Scaggs, in her element, leaned closer to this reporter and raised her voice.

"To have a venue like this, with great sound and amazing ambience and killer bands coming in, it just adds something really special to our scene," she shouted. "Also, and this can't be overstated, it just looks so cool."

Indeed, it does. The structure itself is a testament to old-world beauty. Traces of Gothic Revival architecture mix seamlessly with Scandinavian and Renaissance influences, reflecting the artistic curiosity that seems embedded in Brattleboro's character.

That character is present even on the venue's stone entryway. Johnson and his team have worked for years to remodel the old church and make it accessible and equipped with modern amenities, but they've also painstakingly preserved the grandeur and spiritual beauty. From the stained glass windows to the stage built from old pews, the Stone Church has an incomparable aura, lending an almost devotional aspect to seeing live music.

And, as with a holy site, some visitors must make a pilgrimage to seek it out. That was the case for this Burlington-based music editor.

As Ghosts of Jupiter began their set and the club's lights illuminated the stone walls and reflected off the stained glass, a crowd amassed before the stage. It was a rainy Monday night, but the church soon filled up. By the time Earthless took the stage, the place was packed. The audience included plenty of Brattleboro musicians, as well as Dinosaur Jr. front person J Mascis, who lives in nearby Northampton, Mass.

"The word is starting to get out," Scaggs said about the club. "I think people around here know what we bring and the kind of acts we can book. Now we just need to let the rest of Vermont know."

This series, a partnership between Vermont Department of Tourism and Marketing and Seven Days, will run seasonally, presenting curated excursions in every corner of Vermont. The idea is to highlight the state's restaurants, retailers, attractions and outdoor adventures so Vermonters and visitors alike can plan safe, local trips and discover new corners of the state. Happy traveling, and stay safe.