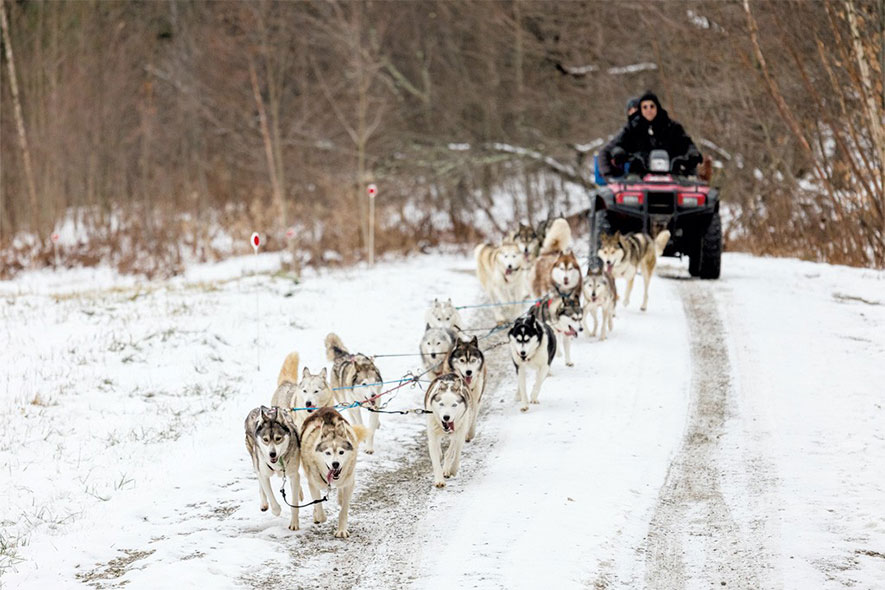 Mojo is a strong leader. He's confident and knows how to motivate others. The team respects him. He's assertive but doesn't dominate. He doesn't have to throw his weight around to make his teammates submit.

After all, he's only about 50 pounds.

Mojo is a 10-year-old Siberian husky with a thick coat of tan, black and white fur, pointed ears, and a game attitude. Anyone who books a dogsled ride with October Siberians, a Hinesburg kennel owned by Rob and Elly Farley, might see Mojo out in front of the dog team pulling the sled.

"You look for a dog that's confident up there and that's got a good drive and is smart and will learn their commands and listen to you," Rob said, describing the characteristics of a good dogsled leader. "It's keeping the team going, setting the pace."

Rob, 61, started dogsledding more than 30 years ago, when he fell in love first with Siberian huskies and then the sport. During the week, he works in hazardous waste management for the Vermont Department of Environmental Conservation. Most of his winter weekends he spends out with the dogs — all 15 of them.

"It's something that captures the imagination, just being out on the trails and traveling through the woods," Rob said. He always liked that he could go farther on a trail with the dogs than he could snowshoeing or cross-country skiing.

"It's just so peaceful out there," he added. "You go out on a full-moon night, and it'll change your life forever."

An October Siberians dogsled outing offers an unmotorized, quiet but invigorating ride through Vermont's winter wonderland. Rob runs the tours from Little River State Park in Waterbury and mostly follows the groomed snowmobile trails. The dogs tug the sled up and down hills, around twists and turns, through woods and past ponds. The ride costs just under $500 for two people and lasts about two hours.

The customers get to drive the sled, too — with Rob's guidance. The tandem sled is equipped with two musher spots, as well as space in front for another person to sit. Rob can take out two people at a time, so if customers come in a larger group, he'll split them up within the allotted time. His most important advice: Hold on to the sled tight, because a rider who falls off will likely get left behind.

German Cuevas and his son, Antonio, took their first October Siberians sled ride with Rob five years ago and have returned from their home in Methuen, Mass., every March since. Antonio, 21, loves dogs and got to harness them to the line, he said.

"Experiencing the wind in your face and watching the dogs run, it's really an experience like nothing else," he said.

His 48-year-old father relishes going deep into the Vermont wilderness. "And the dogs got me there," German said. "I didn't have to hike up." 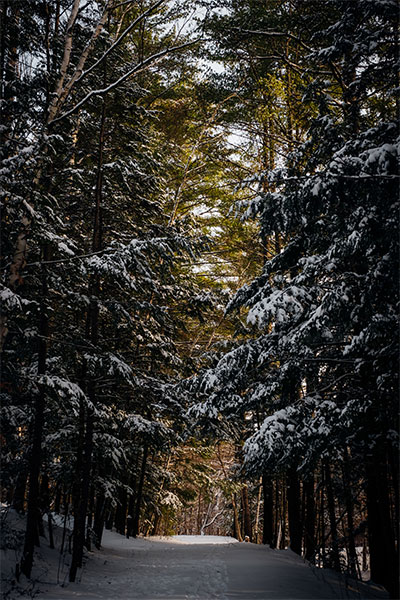 Despite the twisty terrain, the ride is smooth and fast, they said. "Those dogs can go at pretty good speed," Antonio added. "It's almost like pushing the gas pedal all the way down on a car."

Rob was 25 when he met his first husky — a friend's dog that was beautiful and sweet, he recalled. He began to research the breed and visit kennels with Siberians. He eventually went to watch a 60-mile dogsled race in Sandwich, N.H., and was hooked.

The Farleys adopted Thyme, their first husky, from a musher who didn't think the dog had the goods. Thyme proved a worthy mentor, though, to the Farleys' first Siberian puppy, Kona.

Their kennel grew quickly. They added three more dogs, including their first lead dog, Micro. "That's the only position she wanted to run in," Rob explained. "She would throw a fit if she was somewhere else on the team."

By 1996, they bred their first litter and kept two of the puppies. Many have joined the pack since.

Rob never cared much for the intensity or competition of dogsled racing, he said. In 2005, as his kennel and related expenses grew, he saw an opportunity for a dogsled touring business to help pay for the maintenance, food and vet bills. He has a license to run the dogsled in the state park and is a member of the Vermont Association of Snow Travelers, which is mostly a snowmobiling group.

These days, Rob said, he also enjoys doing educational events. He brings the huskies and appears in character as the early 20th-century musher Leonhard Seppala to talk about dogsledding, which he considers a lesson in leadership.

October Siberians' huskies live in a communal kennel outdoors at the Farleys' home in Hinesburg, on hilly property that Elly's parents gave them when they got married. There they raised two children, Sage and Graham, who are now grown. When they were babies, Elly said, a dogsled ride would help get them to sleep. Some parents soothe a fussy child with a drive in a car; Elly sat in the front of the sled with the kids tucked between her legs under a blanket.

The Siberians' dense coats are as warm and fluffy as a down jacket, making them well equipped to withstand the cold. In their kennel, they curl up in old pickle barrels repurposed as doghouses, bedded with straw.

When a visitor arrives, they bark and yelp and whine and jump. Keb, the son of Mojo and Savannah, has a particular talent for getting air — and for climbing, a trait he apparently inherited from his mother. He once ascended the chain links of his kennel to reach the top rafters, where he stayed until his owners fetched him.

The October Siberians' names are all inspired by music. Syd is named for Syd Barrett, cofounder of Pink Floyd; Angus, for AC/DC cofounder Angus Young; and Keb for musician Keb' Mo'. Annalee references the song "Anna Lee" by the band Sonia Dada.

When Rob gets home from work, he lets the dogs out to play in two groups. They run loops around their large fenced area and dig up patches of grass to fling like toys. Every few minutes, one will circle back to Rob and any visitors to spring up and kiss their noses.

When they eat dinner, Rob asks the dogs to sit and wait before saying, "OK." He feeds them raw turkey necks from Misty Knoll Farms in New Haven. The dogs crunch through those in minutes, then lap up a bowl of kibble soaked in water.

In the summer, the dogs chill. It's too hot for them to run. By fall, Rob starts to condition them for pulling the sled, which weighs 500 to 700 pounds with riders in it. He usually harnesses 10 at a time to the tug line and, even before there's snow on the ground, uses a cart or an ATV to help build their strength and endurance. Customers can book cart tours if there's no snow on the ground, but few people do, Rob said.

He watches for slack in the tug line, which indicates that a dog has stopped working and is just running, not pulling. It takes the whole group to power a sled properly.

"Everybody's gotta be working together," he said. "I always compare the dog team to a rowing team. Everyone has to be in sync to make that boat move and move smoothly."

Rob rarely barks out commands to his dogs from the sled. A simple "Let's go" gets them started. He'll clap on the sled to get them moving faster or say "Dig it up" with a growl in his voice. On the sled, he'll call out "gee" for a right turn, "haw" for left and "whoa" to stop.

On busy Saturdays booked with three tours, Rob will rotate the pack so each husky has a chance to run twice. They love it, he said. Even 12-year-old Chapin, a graying lady with a sweet demeanor, still pulls the sled.
Keb and his sister, Evie, are now coming into their own as sled dogs at age 3. Tenny, who is 2 and the youngest of the October Siberians, needs a bit of schooling. She's easily distracted.

October Siberians appear at Sled Dogs Live! on Thursday, December 29, at ECHO Leahy Center for Lake Champlain in Burlington. Presentation times are 10:30 and 11:30 a.m. and 1 and 2 p.m. Learn more at echovermont.org. Book tours at octobersiberians.com.

About the series
This series, a partnership between Vermont Department of Tourism and Marketing and Seven Days, will run seasonally, presenting curated excursions in every corner of Vermont. The idea is to highlight the state's restaurants, retailers, attractions and outdoor adventures so Vermonters and visitors alike can plan safe, local trips and discover new corners of the state. Happy traveling, and stay safe.