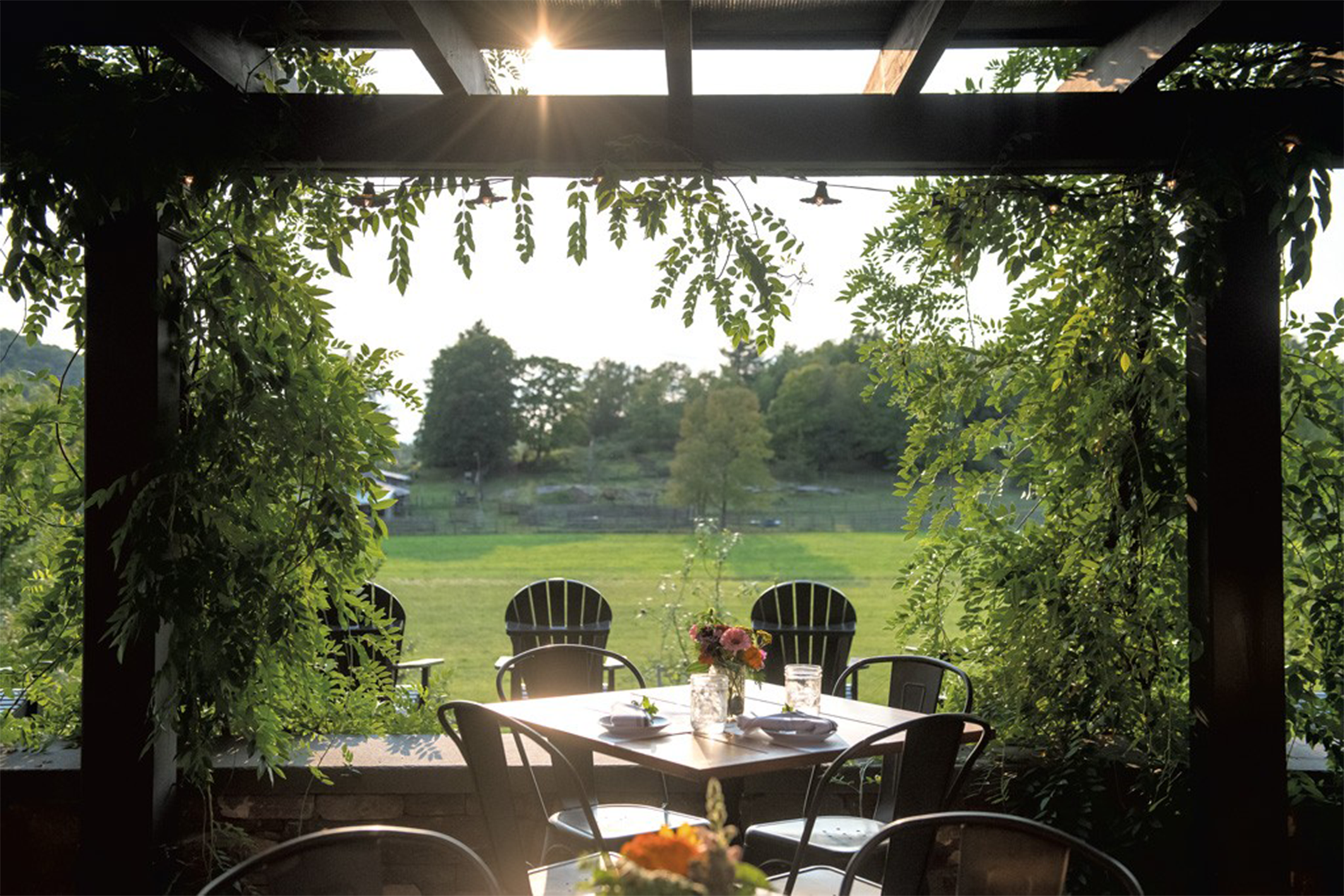 It's hard to beat the late summer delight of digging into a juicy heirloom tomato sandwich on the terrace at Philo Ridge Farm. Bright red tomato bursts with every bite, sending drips rolling off the farm-grown greens and out the sides of the mayonnaise-slathered, light-as-air pain de mie.

The sandwich's seasonal exuberance is matched only by the surroundings: flowers on the table, lush vines winding up and over the terrace, fruit-heavy trees, and expansive pastures. Adirondack chairs on the edge of the ridge entice diners to pause post-lunch and soak in the scene.

"Everybody says, 'Oh, what a pretty view,'" Philo Ridge founder Diana McCargo said. "But it's not just a pretty view. It's actually growing the food that you're sitting here eating."

For many visitors, the Charlotte farm is primarily a dining destination. Its on-site market, which opened in one of the immaculately restored historic barns in July 2018, is stocked with well-priced grass-fed meat, organic produce, specialty grocery items and high-end home goods, as well as grab-and-go prepared foods, pastries, coffee, and tea.

Large windows in the vast dining room beside the market offer glimpses of the Philo Ridge kitchen, which offers casual lunch and elegant multicourse prix fixe dinners Wednesday through Saturday. Gracious servers, led by front-of-house manager Christine Oppenheim, are quick to tell the story of the ingredients, most of them sourced directly from the farm.

A premeal stroll on the self-guided walking trails reveals even more of the work that goes into each plate, especially as summer turns to fall.

In the Ridge Garden and greenhouses, the garden team grows certified-organic vegetables, fruits, herbs and flowers. In the pastures beyond, the land and livestock team shepherds Belted Galloway cattle, sheep, pigs and chickens through a complex choreography of rotational grazing. And they're all constantly communicating with executive chef Kevin Sprouse and the kitchen team to determine the week's menu.

Philo Ridge is not the kind of farm where animals pose for photo ops in the barnyard. Their furry faces get plenty of attention when visitors encounter them, of course. But for most of the summer, the distinctly striped "Belties" are far from that stunning terrace-side view.

"There's this uncelebrated moment when people come to the farm," managing director Irene Hamburger said. "We encourage them to look down."

The grass — and the soil below it — hold the real magic of Philo Ridge.

McCargo and her husband, Peter Swift, purchased the 400-acre former dairy in 2012. They hoped to preserve and restore the hilltop farm's agricultural land.

Herds of heritage-breed livestock, including the Belties and Border Leicester-Romney sheep, spend six months of the year following the grass, cycling through the farm's 200 acres of carefully managed pasture and 120 leased acres nearby.

"They're grazing there, cutting the pasture, fertilizing the pasture," McCargo said. "And when you measure the quality of the soil at the end of the season, it's better than it was at the beginning."

Fall is a busy time for Pitcavage's team. The animals are still grazing, and it's time to take a third cut of hay off some of the fields. Compost needs to be spread on others, and cold-season grasses need to be drill-seeded in rehabbing fields, following the intensive grazing of pigs.

The sheep will get their fall shearing, and the fleece will be sent off for processing into yarn and wool blankets to sell in the market. Chickens are processed biweekly through the summer to provide fresh meat for the kitchen and retail, while steer are harvested throughout the year, roughly three per month. October brings the start of the lamb harvest, which continues through January.

It's also breeding season for the cows — and soon the ewes — so that lambs arrive between mid-March and mid-April, and calves are born on pasture in May and June.

The garden team is busy this time of year, too. The weather may feel like fall, but the farm is still bursting with color — and tomatoes. On an early September stroll along the ridge, garden team member Marissa Pappalardo pointed out perennial buffers exploding with bright yellow tansy, purple echinacea, elderberries, currants and gooseberries. The first annual vegetable bed was a swirl of vines, from which grow pumpkins with fanciful names such as Speckled Hound, Porcelain Doll and Cinnamon Girl.

"This is one of our most beloved spaces in our production, just because it's so diverse," Pappalardo said of the one-acre Ridge Garden. "And if people are walking by on the farm, they usually pass us, which gives us a little interest and intrigue."

Pumpkins are a new crop for the farm, added based on feedback from the market and kitchen teams during winter planning. Those collaborative conversations ensure that the garden grows the right things in the right quantities, Pappalardo said.

Like the livestock team, Philo Ridge's garden team focuses on understanding and improving the soil. The pumpkin bed wasn't in production last year due to high levels of phosphorus. Instead, it was cover-cropped with sunflowers. This year, the team experimented with several bed prep processes, including rye crimping to add organic matter and suppress weeds and broadforking to loosen and aerate the soil.

Lower-maintenance fruit-filled perennial buffers are both loved and hated, Pappalardo said. They're high-yielding but can be overwhelming to harvest. Often, members of the kitchen and market teams pitch in with the tedious currant and gooseberry picking. The farm also works with gleaners from the Vermont Foodbank and the Intervale Food Hub to find a home for excess produce.

The garden will continue at full tilt until frost, while the team balances winter prep with summer harvest and fall plantings. Nightshades such as peppers, eggplants, tomatoes and ground cherries; fall brassicas; winter squash; greens; scallions; leeks; chicories; and an exuberant planting of annual flowers are all still flourishing.

The kitchen's three-course "summer" menu ($64) will continue, too, until mid-October, though the ingredients and cooking techniques will adjust with the change of season. Diners pick from three options for each course and can add dishes for the table such as beef carpaccio ($13), hakurei turnips with mushroom garum ($5), cantaloupe with feta and red onion ($5), and sous chef Buell Alvord's outstanding buns with cultured butter ($7).

The four-course fall and winter menu, still in the works, will have a slightly different structure. "We're trying to move more toward telling the story of the family farm dinner, where families would sit down and share a big bowl of string beans or mashed potatoes," director of hospitality George Stinson said.

With that in mind, and to honor the Foote family who ran the farm's dairy operation for six generations, the new menu will include two shareable first courses and sides for the table. Diners will still choose their entrée and dessert.

Philo Ridge recently stopped taking dinner reservations for the outdoor summer barn seating and will slowly move service inside from the terrace as the nights get cooler, Stinson said. (Both outdoor spaces will remain open for lunch seating until the end of October.)

But hardy diners will experience a special treat: Before they move into the pack barns for the winter, the Belties will be front and center, grazing on alfalfa and red clover in the middle of that picture-perfect, productive terrace view.

This series, a partnership between Vermont Department of Tourism and Marketing and Seven Days, will run seasonally, presenting curated excursions in every corner of Vermont. The idea is to highlight the state's restaurants, retailers, attractions and outdoor adventures so Vermonters and visitors alike can plan safe, local trips and discover new corners of the state. Happy traveling, and stay safe.