A Small State With A Big Story

Vermont’s story began in 1791, when it joined the original 13 colonies to become the 14th state. Its name comes from “Les Monts Verts,” French for Green Mountains, in homage to the 67 mountains and states that give our landscape its topography and striking views. The Green Mountain State is bordered by Canada, New York, Massachusetts and New Hampshire. It is 157.4 miles in length, 90.3 miles wide at the Canadian border*, and 41.6 miles along the Massachusetts border. The Connecticut River forms the eastern boundary, while the western boundary with New York runs down the middle of Lake Champlain for more than half of its length.

Vermont was the first state whose Constitution banned slavery, and many of its homes were stops on the Underground Railroad, a path slaves used to get to freedom in the North. The African American Heritage Trail explores Vermont’s civil rights roots and Black history. Vermont was also the first state to pass marriage equality laws for same-sex couples through the Legislature.

Vermont is the top producer of maple syrup in the country, and is home to about 1,000 dairy farms. Our state forests boast the highest concentration of sugar maples in the U.S., which gives our fall foliage plenty of pop.

Vermont’s historic sites and museums take visitors through the history of life in Vermont, from early settlement to the state’s role in the Revolutionary War to the many notable figures who’ve called it home. 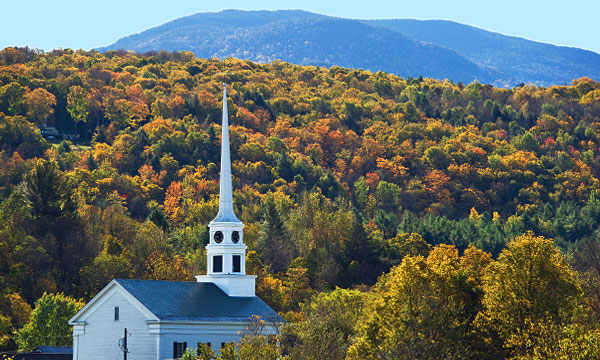 Vermont is home to 23 historic downtowns, rich with culture, beautiful architecture and the chance to immerse yourself in the experience of Vermont’s communities and villages.